Looking for Lavish Lodging in Boston? Consider Spending a Night in Jail 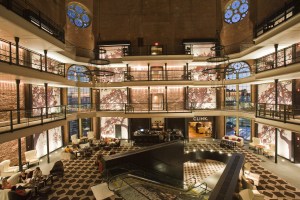 If you are traveling to Boston, consider spending a night in jail. Better yet, don’t just consider it—book a room in advance. The Liberty Hotel in Boston was formerly the Charles St. Jail, and once held famous prisoners like the Boston Strangler and Malcolm X. It was renovated some time in the early 2000s into luxury accommodations, and today has 300 rooms, many with stunning river views, for you to choose from.

Though the rooms now provide Wi-Fi and plush linens, you can still see the original brick walls and catwalks, which form a dazzling 90-foot atrium and lobby. The hotel’s granite exterior and three-story arched windows are also unchanged, and several cell bars have been preserved in the hotel’s restaurants and bars.

The Liberty’s prime location in Beacon Hill offers easy access to a wealth of outdoor recreation, shopping, entertainment and downtown Boston. It is just steps away from the Charles River Esplanade, a historic park that stretches for three miles along the river. Take a stroll, go for a run or see an outdoor concert at the Hatch Shell. Or, you can head down Charles Street for excellent shopping (mostly local designers and entrepreneurs) and dining.

The Liberty Hotel is also a major player in Boston’s social scene. It has two bars—the lobby bar and Alibi, and two restaurants, Clink and Scampo. Alibi is probably the highlight, as it is set in the old “drunk tank” and mixes the hotel’s history with class and character. The walls are adorned with mug shots of the rich and famous—Bill Gates, Lindsay Lohan, Frank Sinatra and Paris Hilton, to name a few—complete with captions of their alibis. Also, if you are really feeling the prison motif, order the “Jailbait,” a refreshing mixed-berry mojito. It is delicious.

The hotel is pet-friendly, so your four-footed friends are welcome. It is also non-smoking.

Spending a night in jail has never looked so good. There is valet parking, champagne when you check in, and the best part: it does not go on your record.